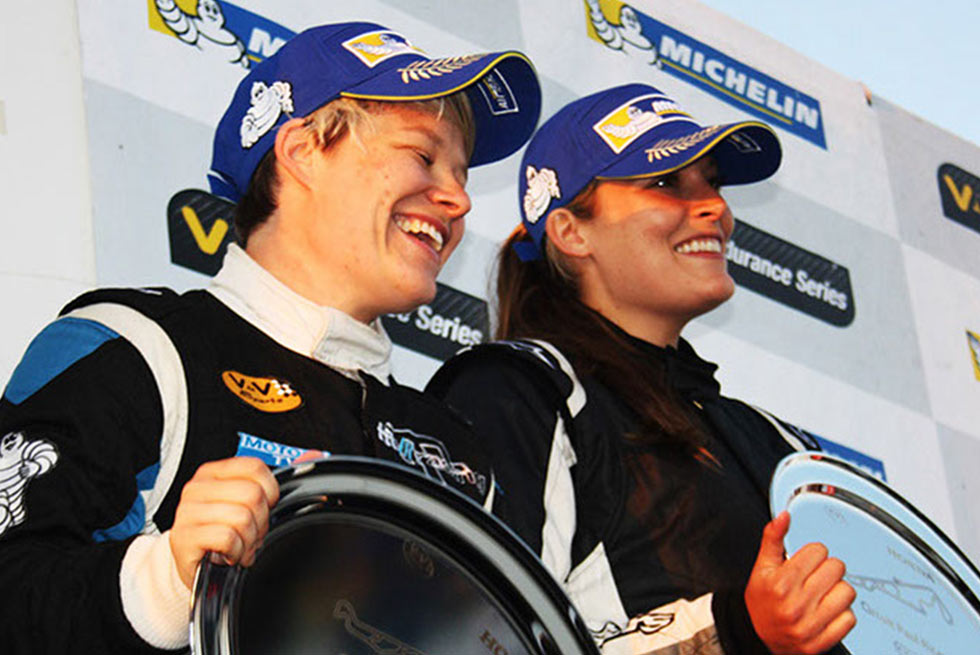 The TFL Racing duo endured a tough session in Friday evening’s one-hour qualifying and found themselves 21st overall on the grid. However, the team were confident that their race pace was consistent enough to seal a strong result.

Haigh took the first stint for the 6-hour endurance but as cars were leaving the garages for the grid the rain came in and, with Haigh still waiting in car in the garage, the team took the gamble to start on wets from the pitlane.

The race was eventually started under the safety car with half of the field on slicks and the other half, including the #26 Juno, on wets. Haigh wasted no time in making her way through the pack, gaining six places before pitting for slicks. She took the decision to end her stint early to refuel, change back to wet tyres and hand over to Reader.

With Reader in the car at the 1-hour mark and having to deal with torrential rain and standing water, the safety car was deployed just ten minutes into her stint, giving everyone the opportunity to take their pit stop allowing Reader to move forward and control the field from the restart.

The safety car briefly came in before again being released as cars continued to leave the track in the conditions. Once the field had sorted itself out and the safety car was brought back in for the last time, Reader kept pushing despite having to constantly drive around the track conditions.

After a gruelling two hours in the car, Reader handed the car back over to Haigh who kept the solid and consistent pace.

Towards the end of her 1hr 20min stint, as the track started to dry, Haigh’s tyres went off leaving her struggling with a lack of grip. She made the call to come in and get Reader back in the car on slicks.
With the track still damp and with standing water still present, Reader kept the class lead and was one of the quickest cars on the circuit mid-stint.

Having only completed four of their mandatory six drive-throughs, Reader came in for number five when she caught traffic in a bid to get in some clean air.

Once back out she soon caught up another group of slower cars and came in again for the entry’s final compulsory pitlane drive-through.

Unfortunately the lead slipped from Reader while driving through the pitlane but she held P2, and 9th overall, comfortably and brought the car home across the line after a tough six hours of racing.

Sarah Reader:
“The whole team thoroughly deserves this result after some bad fortunes at Barcelona and Le Mans and we’re all very, very happy. Everyone has done a fantastic job and I’m so pleased we’ve taken a result that reflects the hard work we put into a race weekend.

“The conditions were some of the most horrendous conditions I’ve ever driven in. There was literally a pool of water in the car and my racewear was absolutely soaked throughout the race!

“A big thank you to TFL Racing, Juno and of course Flick – everyone has been at the top of their game this weekend and we got through everything the race had to throw at us.

“I think we surprised a few people this weekend and hopefully we can keep the momentum going and aim for another podium at Dijon in four weeks’ time.”