Fifth place for Team UK in Race-1 at Vallelunga 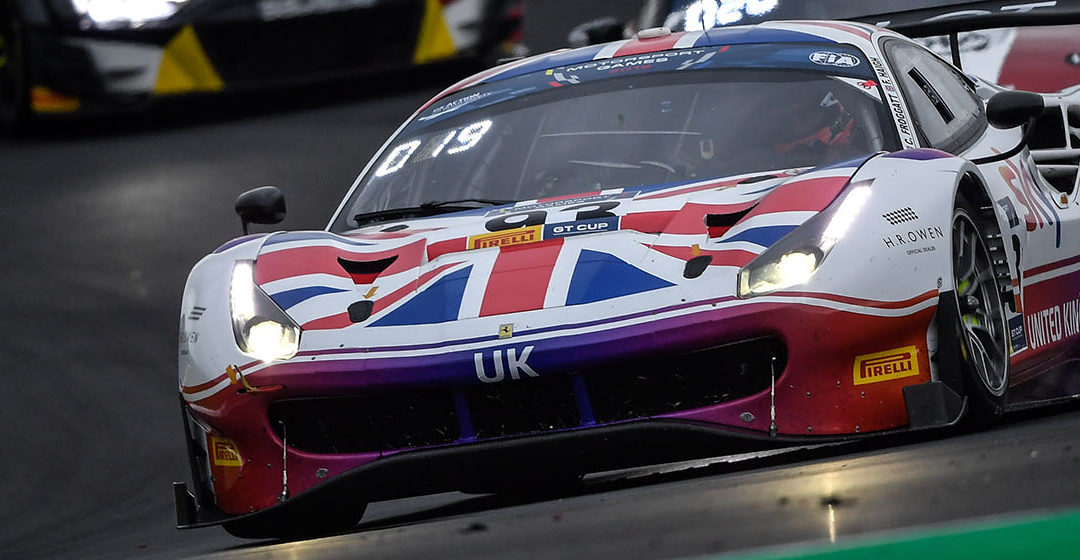 Team UK, crewed by Flick Haigh and Christopher Froggatt, posted the best Ferrari finish, claiming fifth place at the end of the first GT Cup race at Vallelunga, part of the 2019 FIA Motorsport Games. In a race marked by variable weather conditions and a lengthy mid-race interruption, the crews handling the 488 GT3 machinery, fell victim to a combination of strategic errors and plain bad luck.

The track had initially been dry when the sixty minute-race officially got underway, but rainfall was to soon appear on the track near Rome. An accident at the rear of the field saw the Kuwait team excluded from the race, forcing a first-lap Safety Car incursion, with Russian driver Salikhov holding fourth place ahead of Ferriol in the U.S. team’s 488 GT3.

With the track again race-worthy ten minutes later, the action re-started with a very aggressive Salikhov hounding Miguel Ramos, whom he managed to pass, before likewise overhauling Turkish driver Salih Yoluk, then immediately going on the hunt for the Japanese team’s race-leading Lamborghini, driven by Hiroshi Hamaguchi. Roda, mid-group after making contact with the German team car, was forced to take to the grass to avoid hitting the Portuguese vehicle which had come to a halt in the middle of the track after a brutal collision with the barriers. In spite of the inconvenience, the adept Gianluca Roda managed to pull back behind the American team in contention for fifth place. Once again, the prowess of Roda led to the American Ferrari spinning off, before taking a spin himself, this time due to heavier rain, with forty minutes of racing still left on the clock. Capitalising on a mistake by Yamaguchi, Salikhov took the lead on the seventh lap. The Safety Car once again received the call-out, this time to allow the recovery of several cars which had gone off-track, with 38 minutes still left to run.

Russia was now holding the lead ahead of Turkey and Japan. Team Italy’s 488 GT3 was lying in ninth position, while eleventh and twelfth place belonged to Belarus and Great Britain. The American car then dropped a lap, forced to re-pit for a tyre change and a quick repair, with 34 minutes to go, when the red flag came out. Driver-swaps were allowed during this phase, and with the rain having stopped, some crews opted to change back to slicks. Team Russia, going against the trend, kept to the wet tyres.

The action re-commenced with 24 minutes remaining, but a few laps later the Italian squad received a communication obliging a drive-through for two avoidable contacts in the early stages of the race. On rain tyres, but on an increasingly drier track, Russian driver Denis Bulatov was struggling to fend off the challenges from the crews with slicks, gradually slipping down the race order. The British team, with Chris Froggatt at the controls, on the contrary, was on an upsurge, clawing his way to fifth place, imitated by Belarus’ Alexander Talkanitsa Jr in ninth. Without further major upheavals, the race finished with the first of the Ferrari bunch – the British team – in fifth place, followed by the 488 GT3 for Belarus. Ninth place went to the Italian Roda family crew, while the Russian pairing posted twelfth after the decision to stay on wets failed to pay off. After contact in the early stages of the race, the Ferrari of the American squad finished the day in sixteenth position.