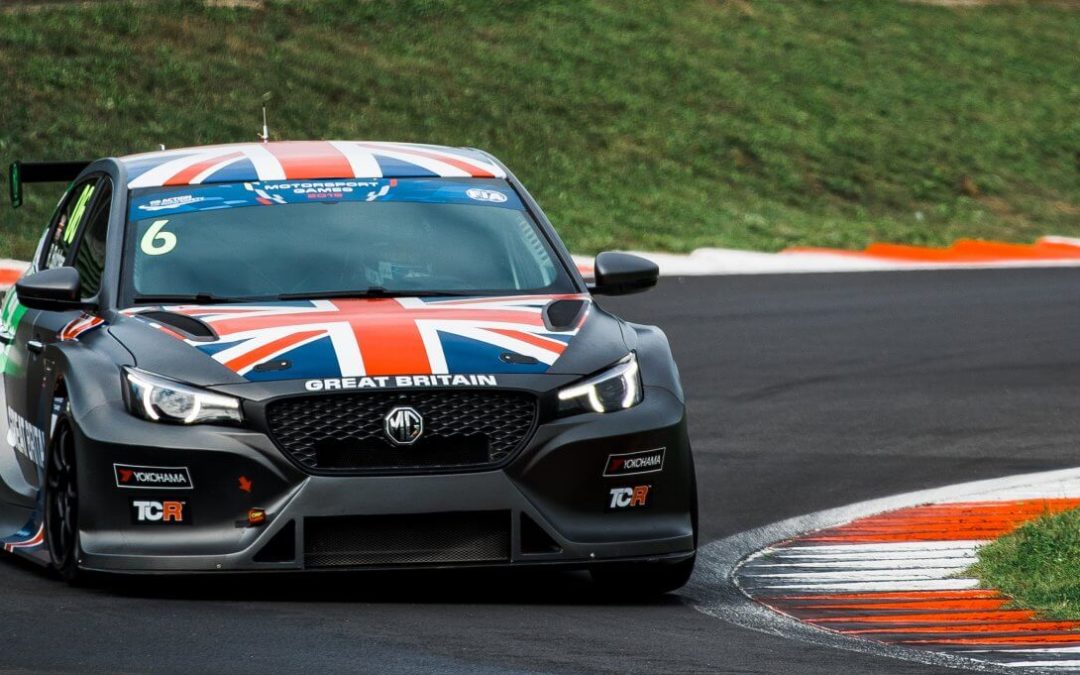 The six-strong team took on the Digital Cup, GT Cup, Karting Slalom and Touring Cup in the four-day Olympic-style event.

Described as the “nation of motorsport” in Thursday night’s opening ceremony, Team UK were led out by Team Captain Flick Haigh as Le Mans legend Tom Kristensen and the President of the Automobile Club of Italy officially opened the Games.

The track action began on Friday with practice for the Digital Cup, GT Cup, Karting Slalom and Touring Car Cup.

DIGITAL CUP
Team UK’s James Baldwin missed out on a third-place finish and FIA Motorsport Games bronze medal by just three-tenths of a second in the Digital Cup Grand Final at the Centro Congressi di Vallelunga.

James, who won the World’s Fastest Gamer competition in California earlier this week, qualified fourth overall before finishing third in his group in the semi-final.

Starting Saturday night’s Grand Final in ninth position, James played an effective tyre strategy and climbed the field to sit in fifth for most of the race. With plenty of drama at the front of the field James took advantage of a mistake by German competitor Mikail Hizal to sail into fourth position with just a few laps remaining.

GT CUP
Chris Froggatt and Flick Haigh put in a strong performance throughout the competition despite difficult weather conditions and incident-filled races.

The opening GT race saw incredible drive in challenging conditions to finish fourth overall in the opening FIA Motorsport Games GT Cup race. The British pairing started 17th on the grid and overcame an incident-filled race as they charged through the pack to claim a spot in the top five.

The second race saw the pairing secure a top ten finish after starting from P16 in wet conditions.

Team UK started a promising fifth on the grid in the main GT Cup race. An early pit stop and errant tyre choice saw the team drop down the field and eventually finish in P15 as torrential rain fell on the Italian circuit.

KARTING SLALOM
Fourteen-year-old Samuel Shaw and Jessica Edgar grappled with an unknown event format and electric karts in the Karting Slalom. Despite an impressive performance the British Kart Championship pairing missed out on a spot in the Final.

Starting in tenth position, Rory soon battled his way up to fifth before a safety car period in the final few minutes closed the pack. With just one lap remaining the safety car was withdrawn and Rory charged, giving it his all on the last corner as he overtook Slovakia’s Homola Matej and pushed for a third place finish, narrowly missing out to Tom Coronel of the Netherlands.

“That was like a victory for me.” Enthused Rory. “We’ve had lots of issues with the car and we were very slow when we arrived here, but every session we’ve pushed and pushed. This is the best the car has ever felt and think that little bit of rain really played into my favour. After taking fourth place on the last corner I feel so happy.”

The positive result comes as the perfect end to a difficult weekend for Rory who finished a disappointed 16th place in the opening race as technical issues with the new MG6 XPower TCR hampered his medal hopes.

Rory has been working with the British manufacturer MG to develop the new vehicle which he drove for the first time on Tuesday (29 October). The FIA Motorsport Games is the car’s motorsport debut outside of China after being homologated just days before the competition.

John Ryan, Motorsport UK Technical Sport Director, said: “We came into the competition not really knowing what to expect and it has gone beyond our expectations. It is brilliant to bring together competitors from so many motorsport disciplines and over 50 nations in this unique event.

“We’re not coming home with any medals but I’m incredibly proud of everyone on Team UK who has joined us in Italy to represent their country. We’ll be back again stronger in 2020.”