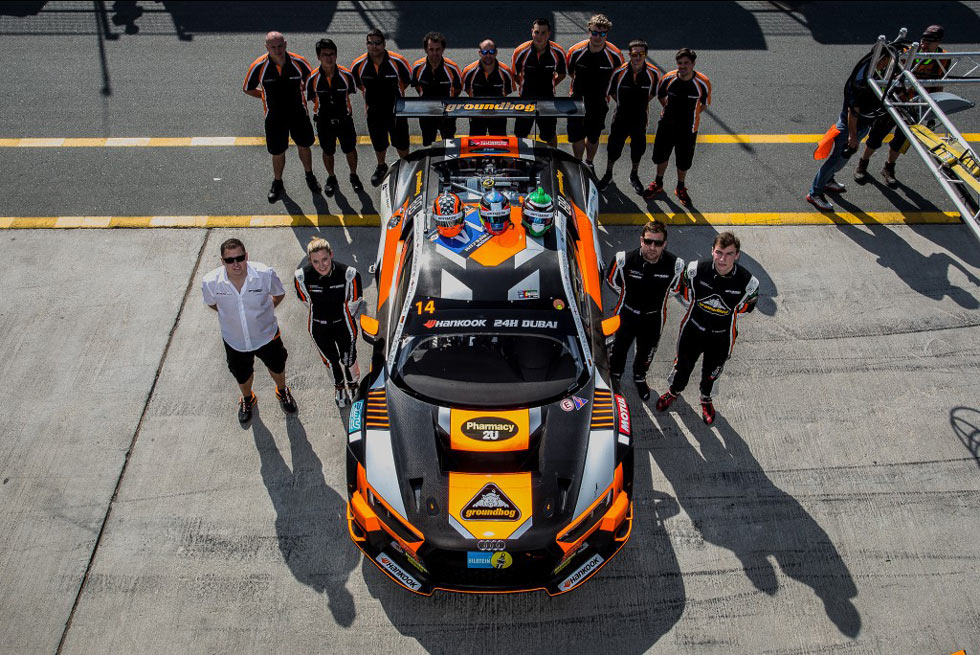 Optimum Motorsport showed great depth and quality by remaining composed and making brilliant strategic calls during its maiden multi-class assault on the HANKOOK Dubai 24 Hours (14-16 January) and its first ever competitive outing with GT3-spec machinery.

The Wakefield, England-based team finished fifth overall and fourth in the headlining A6-Pro class with its brand new Audi R8 LMS GT3 and fourth in the super-competitive SP3 division of the 24H Series powered by HANKOOK, and the results bode well for its 2016 GT3 and GT4 campaigns.

The 24H Series has caught the imagination of many well respected teams and drivers since its inception; 56 cars were entered for the 2006 edition of the Dubai 24 Hours, while the 2016 field consisted of 100 entries, and it was a sight to behold as the pack took the green flag at the traditional 14.00 start time.

Joe Osborne, who held the mantle as the top Brit in sixth overall at the end of qualifying, took the opening stint in the #14 Audi and immediately moved into fourth overall with a hard but fair overtake on Jerome Bleekemolen’s Mercedes-Benz AMG GT.

However, he found himself in the lead at the end of the first hour, after much of the field utilised a Code 60 to make their first tyre and fuel stops, while Optimum Motorsport opted to stick to its game plan and replace Osborne with Frank Stippler during a second neutralisation that occurred after nearly 90 minutes of racing.

A perfectly-timed mid-stint refuel saw Stippler pull out a convincing lead of more than a lap, but a slow front-left puncture forced Optimum to divert from its original strategy and carry out its second driver-change, switching the German ace for Flick Haigh, early.

Positions regularly changed hands as strategies played out and Haigh – a former Caterham Classic Graduate Champion – held her own in the top four against the identical Audi of Land Motorsport and a Black Falcon Mercedes as the light faded over Dubai.

‘Welsh wizard’, Ryan Ratcliffe, made some progress up the leaderboard during his first appearance in the striking black and orange Audi, but all of his hard work was undone when he sustained left-rear damage that required attention at the end of the sixth hour.

Now 16th in class and 25th overall, Osborne spent his second stint making up lost ground and relinquished the car to Stippler in ninth, and another position was gained through the following pit stop cycle.

The next phase of the race was dominated by two successive and protracted Code 60s; the second prompted Optimum to switch drivers and a well-executed stop saw Osborne emerge in seventh, in the wheeltracks of the sixth-placed Audi of Christer Jöns.

Rapid female racer, Haigh, impressed on her GT3 debut, as her lap times were often on par with the leaders’ and the #14 car could be found in and around seventh position in class as the sun rose over the Dubai Autodrome after more than 13 hours of darkness.

However, there were more positions to be had and Optimum Motorsport capitalised on the demise of two frontrunners during the final two hours, and it was Haigh who had the honour of taking the team to fifth place overall and fourth in class on its GT3 debut.

In SP3, Bradley Ellis topped the timesheets in the #223 Ginetta G55 in qualifying and used his supreme pace to gap his rivals before handing the reins to Ade Barwick at the end of a highly impressive two-hour stint.

Barwick picked up the baton well and lapped competitively to remain within the lead battle prior to Daniel O’Brien’s first race run, which commenced as day was replaced by an Arabian night.

Despite limited experience with the Ginetta G55 on the Dubai Autodrome, O’Brien cemented himself in third and it was then up to former Caterham Champion, Elliott Norris, to continue his teammates’ good work aboard the #223 entry.

Norris duly worked his way into the lead, but Optimum Motorsport was out of sync with its rivals’ strategies and the order chopped and changed incessantly when Ellis returned to the fray and during the subsequent hours.

Ellis’s third stint began during the second of two lengthy neutralisations as the race reached mid-distance and quick work from the Optimum crew meant the Surrey-based driver maintained track position and pulled out a healthy advantage at the head of SP3.

Thereafter, Barwick, Norris and O’Brien kept pace and the gap to second position remained relatively static during the early hours of Saturday morning, until an unfortunate alternator failure caused a substantial delay and sent the #223 Ginetta tumbling down the order from first to fourth as the sun rose over the United Arab Emirates.

A dogged drive from Norris saw Optimum Motorsport rise back to second position, but the team sat in P4 when Ellis climbed aboard during the penultimate hour and that’s where he finished in the venerable Ginetta.

Optimum Motorsport Team Principal, Shaun Goff, said: “This is a fantastic result and a great way to begin the 2016 season and Optimum Motorsport’s GT3 venture. I believe we had the pace and the ability do achieve much more in both the A6-Pro and SP3 categories in Dubai, because the team performed remarkably throughout and the drivers were sensational, but 24-hour races are unpredictable and you need luck to be on your side and we suffered some misfortune. Nevertheless, everybody pulled together and fought back to achieve incredible results that bode very well for the forthcoming season in the 24H Series and British GT Championship.”