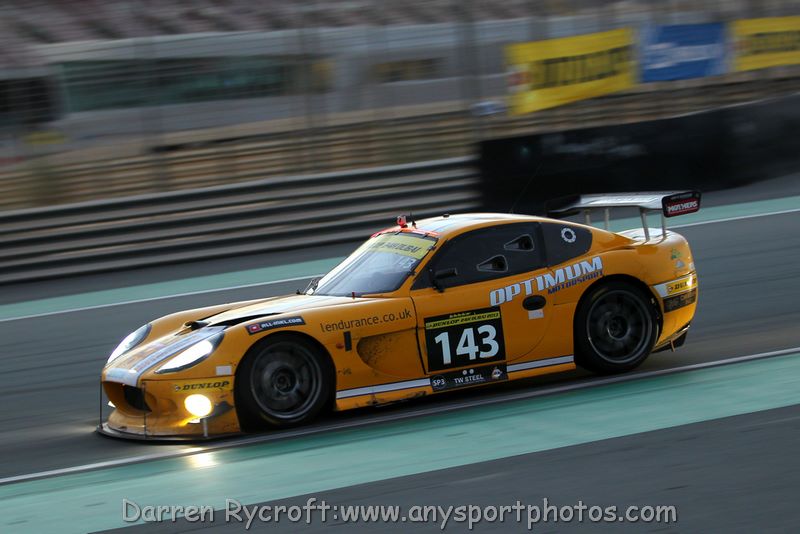 Optimum Motorsport travelled to Dubai last week with high hopes of retaining their 24hr GT4 title. A strong driver line up and the experience gained from last years success gave Shaun Goff and his team every reason to be confident of a successful defence in the 8th running of the Dubai 24hr.

A strong qualifying result was always going to be difficult when running with the 3.5 litre engine, which was slightly down on power, compared to some of the main rivals. Joe Osborne put the Ginetta 42nd of the 82 car grid and 6th in class, with a lap time of 2.12.06, which was right on the BOP 2.12 threshold set for the class, albeit some 3 seconds off the one lap pace of the 3.7 litre Playstation Nissans and the 4 litre Lotus Evora, which posted qualifying lap times in the 2.09′s.

Joe Osborne comments “It was a hard race for the team; the result does not reflect the performance and hard work of the whole team. It was painful to see our lead disappear when the two driveshafts failed, especially after the team put brand new ones in before the race.”

Osborne started the race, and by the end of his first stint, Optimum Motorsport were P1 in class and 23rd overall; a position the team maintained through team mates Lee Mowle, Flick Haigh and Ryan Ratcliffe’s opening stints around the 5.3km Dubai Autodrome circuit. By the 8th hour, Optimum Motorsport had stretched their lead to over a lap with the third placed BMW M3 GT4 a further 3 laps behind, but as Osborne entered the pits at the end of his second stint, the car lost drive and had to be pushed in to the garage for repairs. The broken drive shaft cost the team 23 minutes which meant Mowle would start his second stint down in 8th position. A second drive shaft failure just two laps in to Mowle’s stint forced yet another trip to the garage, ultimately emerging 31 minutes later but by now some 16 laps off the lead.

Strong second stints from Mowle and Haigh got the Ginetta back up to P6 in class and 30th overall by the half way stage as the team pushed for that podium finish. Ratcliffe continued the trend, setting a blistering pace, in the Dubai darkness during his second stint until he was hit by a Porsche, damaging a power steering rod. A further 20 minutes in the pits put pay to any chance of a podium finish. The team battled to the end, finishing a very respectable 27th overall and 6th in class, with an average lap time just over a 1 second quicker than the ultimate class winners!

“If only it had been an 8hr race” said team manager Shaun Goff “lady luck was not on our side this year, which was a huge shame as all four of our drivers did a fantastic job in the very challenging conditions and deserved to bring away some silverware for their efforts. The 82 car grid made for a very busy circuit and a hugely exciting and challenging race with, on occasion, some very questionable driving standards from some of the competitors, which led to a number of high speed accidents. It was very lucky that no one was seriously hurt”

Optimum Motorsport will run two Ginetta GT4′s at the 9th edition of the Dubai 24hr next year and you have to fancy their chances.