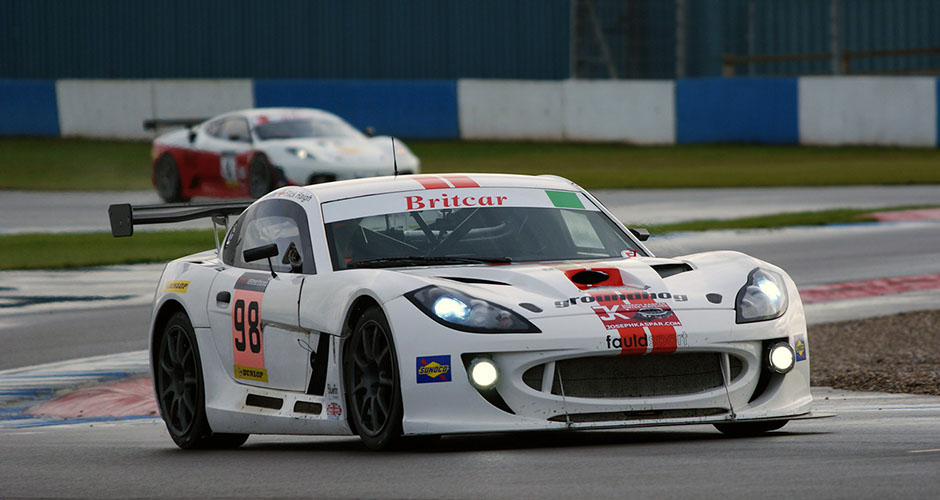 Ginetta were once again at the top of their game as their G55 cup cars claimed the top two podiums spots in the four hour Britcar Endurance Series into the night race held at Donington Park last weekend.
With a total of 17 cars on the grid, the Fauldsport-run G55 of Flick Haigh and Ryan Ratcliffe and the Redgate / Virgo Motorsport car of Peter & Matt Smith plus Dan Eagling were dominant from the outset.

Ratcliffe and Haigh showed their pace all weekend as they repeatedly topped the class 4 tables, no mean feat given that Flick had never raced in the dark before, yet set the quickest time of any class 4 car in the night qualifying. Similarly, a wet day qualifying saw the drivers tested once again as neither had experience driving in the rain, however, they wouldn’t be deterred and put the Fauldsport machine on pole. Just behind them the second G55 of Smith, Smith and Eagling started from P2 in the class.

Kicking off at 3.45, Haigh started the race for Fauldsport and immediately began to etch out a gap over her class 4 rivals, even challenging some class three stars for on track position. Whist the Redgate car slipped to overall P16 at the end of the first hour, it wasn’t long before they brought out their fighting spirit, climbing back up to overall P9 over the next 60 minutes, closing up on the pair of works Nissan GT4 cars, which, in turn were chasing down Haigh and Ratcliffe.

As Ratcliffe took over the driving duties for Fauldsport, it started to rain and the Welshman was forced to pit for wets, however, once racing recommenced, the rain stopped but it would cost the team too much time change to slicks so Ryan stayed out on a fast-drying track on full wets.

Pitting from first in class, Haigh rejoined in third, with the two RJN Nissan’s three laps ahead, however, an outstanding stint meant that by the time she handed the car over to Ratcliffe for the final push, they were back in the lead by one lap. Ratcliffe managed to keep out of trouble and kept putting in consistent lap times to keep the car in P1 and bring it home for the win.

In the meantime, Smith / Smith and Eagling had destroyed their rivals advantage, and finished in second, closely behind the Fauldsport G55 of Ratcliffe and Haigh with just one litre of fuel left in the car.

Peter Smith said of the event; “Matt drove the race of his life and in the damp period was the second fastest car on the track in all classes. In all, it was a satisfying end to a difficult season, the Ginetta was simply magnificent and it has been a great team effort from Redgate/Virgo. Now we look forward to 2013 and hopefully a return to British GT, once again likely in a Ginetta.”

In the Britcar Production Cup, Ratcliffe also competed in his Ginetta GT5 Challenge Piranha Motorsport G40 with Simon Mason, and despite a big off during qualifying which saw him slam into the wall at Craner Curves, the team managed to fix the car in a blinding 40 minutes to get the car out for the race.

Despite not having time to work on the car setup before the race, Ratcliffe fought hard to hold class second position on the track, before Simon Mason took over driving duties and passed the lead car with 6 minutes to go, bringing the car home in class first position.

After winning both races Ryan quoted “It has been one of the best weekends of the year for me, I couldn’t have asked for better team mates or better teams. They all performed outstandingly and I would love to work with them all again in the future!”

The win sees Mason & Ratcliffe in with a chance of taking home the class honours in the Britcar Production Cup at Brands Hatch in a few weeks time.