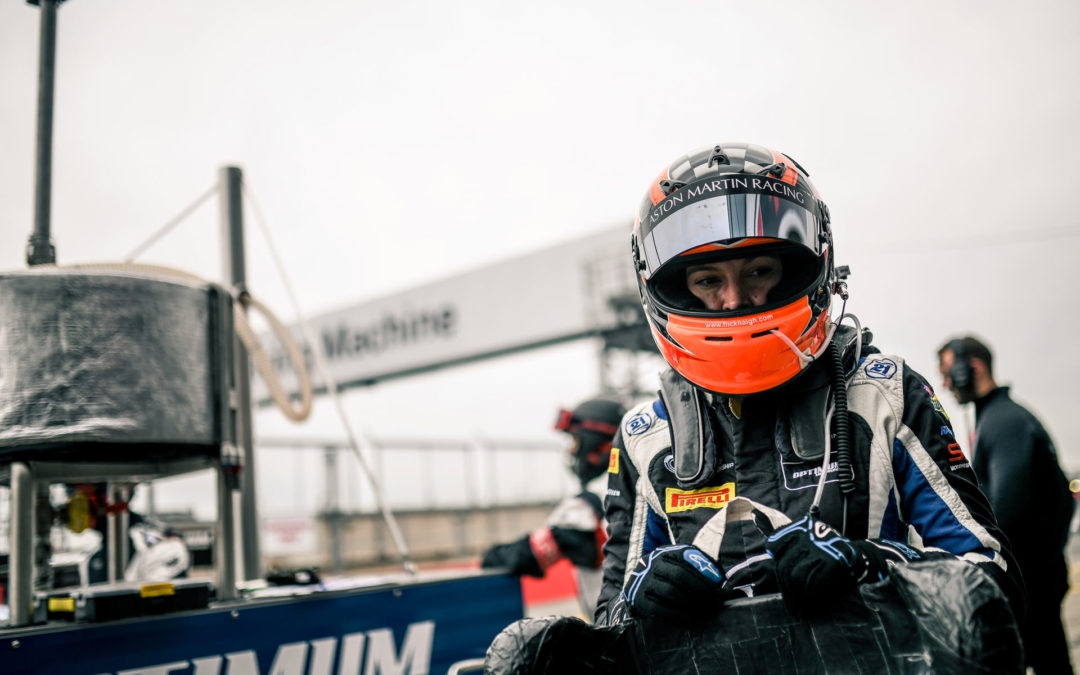 What does it mean to be beaten by a woman in a male-dominated sport?

At first glance, most people would say it should mean nothing — the best competitor has won. I personally hadn’t thought much about it until last year, when I became the first woman to win the British GT Championship. The overwhelming reaction my victory received made clear that the achievement was rare.

Some other experiences have had a similar effect on me.

I’ve won more than one “Driver of the Weekend” award — something to celebrate, no doubt, but tainted by the knowledge that the title was updated only recently from “Gentleman Driver of the Weekend,” the traditional term for an amateur. The watch I received with my championship trophy at the British GT awards ceremony — a Blancpain — also carries a thoroughly male-centred history. Mention racing watches, after all, and who else comes to mind but Paul Newman and his Rolex Daytona?

Although I have never felt too different from male drivers, it’s clearer than ever to me that racing and other professional sports around the world must make gender equality their priority.

The question of how, or whether, to do so has always bubbled just under the surface. Recent momentum has merged equality in sports with the broader social fight for equal rights, and rightly so. My British GT victory was an exception to the norm, and that will not change in the sporting world until gender inequality is eradicated from society as a whole.

Growing up on a working farm, another predominantly male realm, I always felt equal and capable. While I can remember the odd puzzled looks from passers-by who saw a girl barely old enough to drive operating a forklift or moving hay bales with a huge tractor, it never bothered me.

Even when I was a child, playing with my little brother, our toys were not segregated based on gender. I would borrow his favourites, he would borrow mine, and we would — for the most part — play nicely together.

Positive experiences and situations like those are the foundation of what we carry into adulthood. I learned from a young age that my gender shouldn’t hold me back in any career. If we can teach equality before sports are even in the picture, then it will become standard procedure later on.

That attitude is why, when I got into motorsports, I had no preconceived doubts about my ability. I was just another driver, there for the same reason as everyone else: to win. I joined a very welcoming Caterham racing club, whose team treated me with the utmost respect.

Sadly, not everyone would have the sport be so open.

Bernie Ecclestone, the former chief executive of the Formula One Group, has never made any bones about his view on women driving a Formula One car. Plenty of other people think similarly. But to say that women drivers would not be taken seriously, or could not compete physically with men, is narrow-minded, sexist and flat-out wrong. Motorsport requires fitness, not strength or size. Women are in no way disadvantaged by men — not even at the top.

Some have suggested that a segregated women’s league would draw both more drivers and more fans by encouraging competition on a so-called level playing field. That, however, is still built on the erroneous idea that there is some physical reason preventing women from competing with men. It sidesteps the much larger problem of a lack of opportunity for girls and women to enter the sport, and the lack of awareness to even encourage them to.

Consider engagement with racing as a pyramid, with elite drivers at the top and kids and everyday enthusiasts making up the base. In Britain today, 92.8 percent of those with karting licenses who are under 16 years old are male. With so little female participation at the broadest, seemingly most accessible level of the sport, it’s no surprise that the odds are stacked against a woman making it to Formula One — and that’s without taking into account the luck, and money, needed to do so.

When I was younger, I was lucky enough to be invited to a day at the track where I could drive different types of cars. The experience sold me on racing. But by the time I really got into the sport, in my early 20s, I was very inexperienced compared with the drivers around me.

Parents and schools should play a critical role in providing access to karting sessions, just as they fund programs for other sports, music or dance. Racing’s governing bodies and organizers must also step up, investing to make karting more affordable and accessible. Just as in any other sport, those at the top have the greatest power and responsibility to create these opportunities and to ensure that they’re equally open to all genders.

We should also reconsider how we present sports to children at a very basic level.

Last year a 13-year-old girl told the BBC that she was repeatedly called a lesbian by her peers because she played soccer and was told by her teachers that she wasn’t allowed to play what they deemed a “boy’s sport.”

Instead of using children’s genders to deny them equal opportunities, let’s cultivate their interests regardless of what they are, and let them become inspired by what they find. In Britain, participation in sports increased to almost 37 percent from 34.6 percent after the London Olympics in 2012. And after my championship win, I’ve noticed an increase in parents and their daughters finding me at race weekends for an autograph.

The more aware girls are of potential role models, the more they’ll aspire to be like them. Women may not yet be racing at the highest level of motorsports, but that doesn’t mean we don’t exist. We’re winning trophies and breaking records everywhere else, and the sport should evolve to reflect our achievements and our ambitions. This doesn’t just apply to racing, either. Sporting organizations the world over need to get with the times. Female athletes are fighting our way to the top, and we’re here to stay.

This is an article from Turning Points, a special section that explores what critical moments from this year might mean for the year ahead.
Image rights: https://www.nytimes.com/2019/12/06/opinion/women-sports-segregation.html
Photography by: Indira Flack