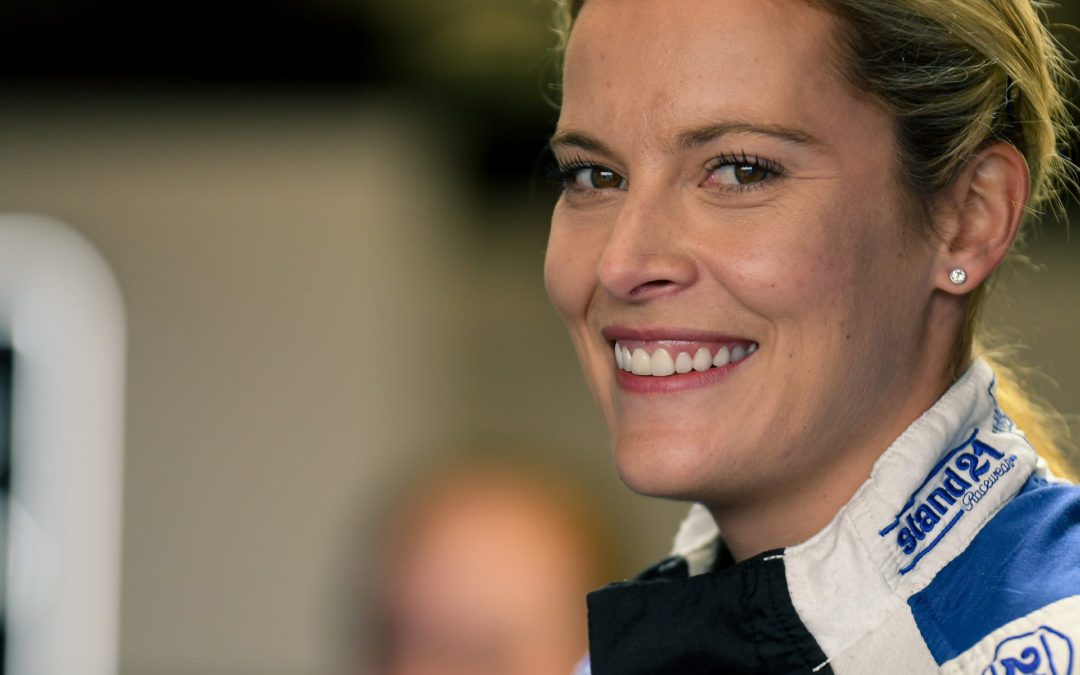 It was not until she was in her early 20s that Flick Haigh first took to the track.

Having obtained a BSc (Hons) degree in International Equine and Agricultural Business Management, she had seemed destined for a career in the family organic dairy farm but, after this had been sold, Flick felt she needed a different challenge. Following an intensive course at Silverstone, a Caterham Classic was acquired to compete in the Caterham Graduates Championship. Seventh place in the first season was followed by fifth in 2008 and culminated in Flick taking the title in 2009 on the back of five race wins, four other podium placings, four pole positons and three fastest laps in this ultra-competitive class of racing.

For the next four years Flick stayed with Caterhams in the top 8300 Superlights class, invariably among the front-runners. However, towards the end of the 2013 season a bad crash at Oulton Park’s Druids Corner saw Flick airlifted to hospital with six broken ribs, five chipped vertebrae and bruised lungs. Flick had already sampled a GT car with some success at the end of 2012 when, sharing a Fauldsport Ginetta G55 in the final round of the Dunlop Britcar Endurance Championship with Ryan Ratcliffe, she won her class and finished fifth overall. This led to plans for a full season in the 2013 Britcar series in a Fauldsport Ginetta G55 which yielded several class podiums before the Oulton Park Caterham crash prematurely terminated all racing activity for the rest of the year.

At the beginning of 2013 Flick entered the Dubai 24 Hours in an Optimum Motorsport GT4 Ginetta G50, the first of four ventures into this popular endurance event. Missing the 2014 race while she completed the recovery from her OuIton Park injuries, Flick returned to Dubai in 2015 in a GT4 Speedworks Motorsport Aston Martin Vantage, finishing third in class. In 2016 she was fifth overall and a year later fourth overall in the Optimum Motorsport Audi R8 LMS with Joe Osborne.

For 2014 Flick became part of TEDD, the Triple Eight Driver Development programme alongside Ryan Ratcliffe as she re-assessed her racing ambitions. A highlight of the season was second place in class and ninth overall in a Juno sports-prototype in the VdeV six-hour race at Paul Ricard with Sarah Reader in gruellingly wet conditions. In 2015 Flick shared an Optimum Motorsport Ginetta 555 with Adrian Barwick and Bradley Ellis to a SP3 (GT4) class win in the Mugello 12 Hours and followed this with a class fourth place in the Barcelona 24 Hours. There was also a class win in the GT Cup Championship at Donington Park. In 2016, along with the Dubai 24 Hours, Flick also had outings in the Gulf 12 Hours in the GT3 Optimum Motorsport Audi R8 LMS, finishing sixth overall and second in Pro Am with team mates Joe Osborne and Ryan Ratcliffe, and in the GT3 Le Mans Cup, the latter becoming the focus for the following year.

In the opening round of the 2017 Le Mans Cup at Monza, Flick and Joe Osborne looked to be on course for an overall win only for a time penalty to relegate them to second place. Third places at the Red Bull Ring and Paul Ricard secured fifth in the championship. Encouraged by the successes against strong international opposition in the Le Mans Cup, Flick stayed with Optimum Motorsport for her first attempt at the British GT Championship with the Audi replaced by a GT3 Aston Martin Vantage and Jonny Adam coming on board as co-driver. The first weekend of the season was at Chilton Park, the scene of Flick’s injury-inflicting Caterham accident four and a half years earlier. She could hardly have risen to the challenge better, impressively taking pole position in the ‘Am’ session and handing over to Jonny in the lead of the race, which they duly went on to win. There was a further victory in the two-hour Brands Hatch round which, together with third places at Silverstone and Spa Francorchamps, secured the tale —for Flick at the first attempt and for Jonny the third of what has since become four titles.

To Flick’s considerable disappointment, she was unable to convert her British GT success into a full-time drive in the Blancpain GT Series and she has been relegated largely to the sidelines in 2019 apart from outings in the two Le Mans Cup races before the 24 Hours itself. Paired with 2018 McLaren Autosport BRDC Young Driver of the Year award winner Tom Gamble in a TF Sport Aston Martin, Flick finished sixth and a penalised 11th. And to her great delight Flick was selected to represent the UK in the recent FIA Motorsport Games at Vallelunga, sharing a Ferrari 488 GTE with Chris Froggatt. Fourth in the first race was followed by 10th in the second and 15th in the main race.